Like Bill Turnbull and Stephen Fry, Russell is keen to make more men aware of the importance of getting themselves checked early and regularly.

In the United Kingdom, Prostate Cancer is the most common cancer in men, with more than 47,500 diagnoses every year. With celebrities including Stephen Fry and Bill Turnbull announcing their own prostate cancer journey in recent years, the ‘Turnbull/Fry’ effect led to more men getting themselves checked for early warning signs and potentially saving themselves from adverse outcomes by getting an earlier diagnosis.
Their stories resonate with that of Russell Stewart, a 69-year-old retired Sergeant in the Royal Engineers Bomb Disposal, and Police Sergeant from Newcastle. Despite having suffered slight issues with incontinence since his 50s, for which he was on long term medication, Russell never considered he was showing any signs of prostate cancer. However, around the same time in 2017 that Bill Turnbull and Stephen Fry were going through their own diagnoses, Russell went to his GP to get himself checked.
“I’ve always been a bit of a workaholic, but retirement gave me a bit of time to think. I did some research and found that if you were over 50 and wanted a PSA test, you should be able to get one. I didn’t have any problems, other than the incontinence which I largely had under control, but I went to my GP who thought I had a slightly enlarged prostate, but with no concern.
“Around August 2017, I went for a blood test, and my PSA reading was 5.76. From my research, I knew that they expect most males to be between 2-4, but as you get over 50, if it’s slightly higher it isn’t necessarily something to be concerned about. However, my doctor suggested we tested my PSA level every 3 months for a year to monitor the results.”
Between August 2017 and June 2018, Russell’s results kept fluctuating. However, by June 2018, his score had risen to 7.33 – which was the point when his doctor referred him to the Queen Elizabeth Hospital in Gateshead for diagnosis. Russell underwent a TRUS biopsy, which showed there was a small cancerous lesion contained within the prostate, which the consultant said was both treatable and curable.
Together with the multidisciplinary consultancy team at the hospital, Russell began to explore the various options available for treatment, which included undergoing a radical prostatectomy or low dose rate brachytherapy. “I never felt I had any definitive guidance or pressure from the hospital as to what I should do, instead, my options were presented to me and I was given the choice,” Russell comments.
With such an important decision ahead, Russell researched his options for around 6 weeks as he continued to ask questions on each of the procedures to ensure he was as informed as he could be. From his research, he interpreted that the potential side effects of brachytherapy, compared to surgery, would be less intrusive and have less impact on his lifestyle, which involves lots of walking and working with gun dogs. He settled on brachytherapy as his preferred treatment option in August 2018, adding that “The team at the hospital was fully supportive of my choice and my consultant said I had made the right decision – but I wasn’t pushed in any direction.”
After his final consultation in September, Russell underwent the brachytherapy procedure at the Newcastle Freeman Hospital on the 11th of December. Russell highlights that since the operation everything has settled down, and his recovery process has been remarkable.
“From a personal perspective, my problems with urination and bowel movements have gone from good, to better, to even better over time. I’m better than I was before the operation, and I haven’t had any issues since which I’m quite pleased with.”
Another factor Russell had read about from other men’s personal experiences was the loss of sexual function. Some treatment options, such as radical prostatectomy, can have more adverse side-effects than others, including erectile dysfunction, which can be a big concern for many men when they’re diagnosed with prostate cancer. However, this worry shouldn’t stop men from progressing with treatment, as not all treatment options affect a man’s sexual ability.
Russell recalls a conversation he had while waiting for one of his appointments, where another gentleman was discussing his treatment options for prostate cancer. “He had a high level of cancer which had grown outside of the prostate but had decided to watch and wait. His reasoning was because he didn’t want to lose the ability to have sex, yet he was in his late 60’s. It’s true that my prostate cancer was not as advanced and brachytherapy was an option available to me, but I think it’s important men understand that there are choices available to them that can be minimally invasive.”
3 months later, Russell continues his consultation visits to make sure everything is okay. Since his operation, his last three PSA test scores have been under 1.
Discussing his prostate cancer experience, Russell applauds the process from diagnosis to the operation: “It couldn’t have been any better. I don’t think I would’ve had better or faster treatment in a private situation than with the National Health.” 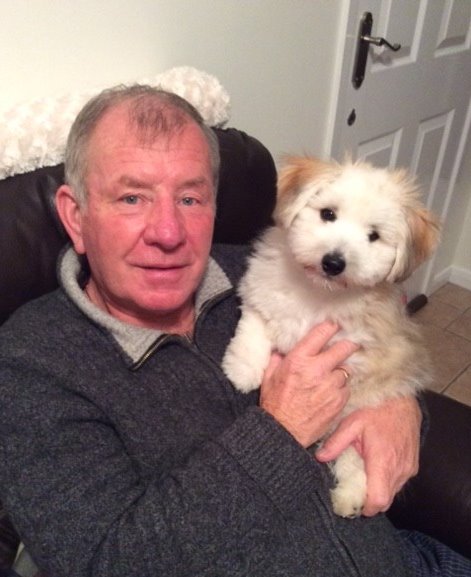 “I appreciate men are reluctant to speak about it, but it needs to be talked about. For the sake of having a blood test, which is so accessible and doesn’t cost anything, it could change your life.”
PrecisionPoint login

Français
We use cookies on our website to give you the most relevant experience by remembering your preferences and repeat visits. By clicking “Accept”, you consent to the use of ALL the cookies.
Cookie SettingsAccept
Manage consent